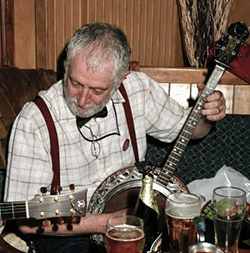 Before Push For Porter (BPFP) I used to play three-chord guitar with some friends in the Conradh na Gaeilge Club in Uimhir a Sé Harcourt Street.....

Lá amháin I called in to Charlie Byrne's to have a look at the shop and Charlie sold me my first mandolin. I drove our daughter Kate batty with Shoe The Donkey. I had the mandolin in the car on my way to work in Dublin and played it at every red light.

At the same time I was discovering the world of computers through a Commodore 64. There was a program - Sonix, I think, for writing and playing music. Frank Buckley (RIP) came over, had a look and went straight out to buy all the gear. Frank invited me to come along to Con's pub in Allenwood. We knew Con from his days in The Roost. Dave, Peter, Jonathan, Frank and his brother Joe were playing away and I basically just listened and hoped to pick up what I could.

Eventually, I began to figure out the various rhythms and got a handle on the reels, jigs, polkas and hornpipes. The SlipJigs, Slides, Mazurkas, Airs, Setdances and Barndances all lay in the future. I reckoned the Commodore 64 might come in handy to get all this new stuff sorted and I began my HTML apprenticeship. I had found Henrik Norbeck's fantastic collection of Irish Music and thought that would suffice. Damian decided to help - for weeks he trawled the Internet and send me scraps, bunches and oodles of .abc tunes, some of which were similar to what the lads were playing but most bore no resemblance at all bar the titles.

Luckily I found a Master. Mister Buckley, as Jonathan once called him, helped enormously in providing what I came to regard as the blessed versions of the tunes. He also organized the tunes into SETS, which we are still using to this day.
Realizing that Irish Traditional Music is as variable as the weather, Joe reckoned it would be good if we were all playing from the one hymn sheet at the one time. So, I took charge of the web side of things and Joe made sure we had an Approved Version of each tune.

If I'm given sheet music, I write it out in .abc and then convert that to .midi and .mp3 and finally back to sheet music to fit the web page. It was very handy in the early days to use midi for the sounds - MIDI is very light on resources - it's just text which the computer turns into sound. Unfortunately, the Apple iPhone does not support Midi so I'm adding .mp3 versions nowadays. The Midi versions are still available by clicking the "Show Midi" on top of the page.